Lard Sandwiches? I Don't Think So.

Book group met today to discuss The Glass Castle by Jeannette Walls. Since the book recalls a childhood of crushing poverty, there wasn't much to pull on for inspiration for a three-course brunch (one group member suggested we have frozen iguana, since in the book a pet freezes to death in their unheated shack). For our largest attendance in a long time (we ended up at 9), I needed something easy to make in large-ish quantities. With wet and chilly weather the last few days, soup sounded like just the ticket, so we had the Chicken/Corn/Sweet Potato Chowder. I baked a loaf of Simple Crusty Bread (this time I added 2 T honey with the warm water, yeast and salt, and the flavor was much improved--I think I'll try even more next time), and no one could believe it was home made. New recipes for today were a salad of orange, avocado and watercress with ginger-lime vinaigrette, and a lemon layer cake. I was in full-on panic mode this morning, so no pictures were taken. I'll go downstairs and take one of the remainder of the cake.

Peel and pit avocado, and fan thin slices on each individual salad plate. Season lightly with salt (forgot this part--it was still delicious).

Add oranges to bowl with dressing and shallot and toss to coat. Then add cress and toss gently. Divide salad between plates and serve immediately.

Measure 1 T of lemon juice into small bowl and sprinkle gelatin over top. Heat remaining lemon juice, sugar and salt in medium saucepan over medium-high heat, stirring occasionally, until sugar dissolves and mixture is hot but not boiling. Whisk eggs and yolks in large bowl. Whisking constantly, slowly pour in hot lemon-sugar mixture, then return whole mixture to saucepan. Cook over medium-low heat, stirring constantly, until mixture reaches 170 degrees. Immediately remove pan from heat and stir in gelatin mixture until dissolved. Then stir in frozen butter until incorporated. Pour through strainer into bowl, cover surface directly with plastic wrap, and refrigerate until firm enough to spread, at least four hours.

Preheat oven to 350, and grease and flour (or use Pam baking spray, like I do) two 9-inch round cake pans, then line bottoms with parchment. Whisk together egg whites, vanilla and milk in two-cup liquid measuring cup.

Mix flour, sugar, baking powder and salt in mixer with paddle attachment. With mixer running, add butter one piece at a time, and blend until butter has been incorporated and mixture looks like moist crumbs. Add all but 1/2 cup of milk mixture and beat at medium speed until light and fluffy, about 1 1/2 minutes. Reduce speed to low and add remaining milk mixture, then increase speed to medium and beat 30 seconds more. Scrape sides of bowl and beat 20 more seconds on medium. Divide batter evenly between pans and smooth tops with rubber spatula.

Bake until toothpick comes out clean, 23 to 25 minutes. Run paring knife around edges of pans, let cool in pans on rack for 10 minutes, then carefully remove from pans, peel off parchment, and let cool fully on rack, about 1.5 hours.

To assemble cake, cut each cake into two even layers, and spread about 1 C of lemon curd between each, leaving 1/2-inch border around edge. Cover and refrigerate assemblage while making icing.

Combine all ingredients in bowl of mixer and set over 1 inch barely simmering water in medium saucepan (don't let bottom of bowl touch water!). Cook, stirring constantly, until mixture reaches 160 degrees, about 5-10 minutes. Remove bowl from heat and transfer to mixer with whisk attachment. Beat about 5 minutes on medium speed, until soft peaks form. Incease speed to medium high and beat about 5 minutes more, until mixture is room temperature and forms stiff peaks. Spread frosting on cake and serve right away or up to one day later. 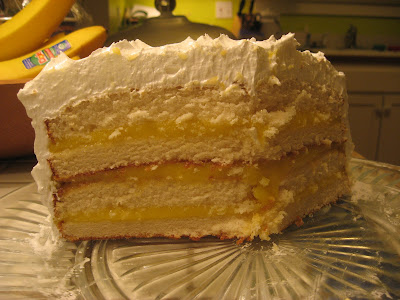 Posted by Anonymous at 8:29 PM

Labels: hostess with the mostes'?, sweets for the sweet

I love that orange-avocado-watercress salad. Yummy. Sounds like you put together a fabulous menu yet again! Makes me wish we were in your book club. Our book club sucks. :-( Sigh.

I am so glad I am in your book group! Not only was the food delicious as usual, but so was the conversation! Bummed we had to leave for the soccer match - which we won!

Aw, I wish you all could be in my book group, too! We could do a virtual book group, but the virtual food just isn't as tasty. :)