I should, but do not, have a picture of this. I have made it several times and each time am flabbergasted by how good it is. It is not like other cheesecakes (flash of Michael Jackson saying, "I'm not like other guys" in the Thriller video), and no one ever leaves any on his or her plate, no matter how much they might not usually like cheesecake. The one change I might possibly suggest would be to use the juice of half a lemon instead of a whole.

Justa Pasta's Cheesecake
as printed in the Oregonian in September 2004 (thanks to Sara Perry for sending it to me after I struggled accessing the archives!)

Do not preheat the oven.

To make the crumb crust: Mix together the graham cracker crumbs, sugar, and butter until well blended and crumbly (my Cuisinart had the softening cream cheese in it, so I put the crushed-slightly-with-my-fingertips crackers in my Kitchenaid with the butter and brown sugar, and it worked just great to break them down further). Transfer to a 10-inch springform pan and firmly press the mixture onto the bottom of the pan (I use my straight-sided metal one-cup measure). Chill the crust while making the filling.

To make the filling: In a food processor, combine the cream cheese, sugar, vanilla and almond extract until creamy and smooth, scraping down the sides and bottom of the bowl as necessary. Beat in the egg until fully blended. Pour into the springform pan and place it in the center of the cold oven. Turn on the oven to 350 degrees and bake for 40 minutes.

To make the topping: Meanwhile, mix together the sour cream, sugar, lemon juice, vanilla and almond extract until blended. Remove the cheesecake from the oven and gently (very! one time I made this I wasn't so gentle, and made a big divot in the filling from the topping waterfall) spread the topping over the cake. Lower the oven to 300 degrees and bake for 15 additional minutes. Transfer to the refrigerator to chill at least 4 hours or overnight. Using a paring knife, loosen the sides from the inside edge of the pan. Slice and serve.

Labels: holiday fare, hostess with the mostes'?, sweets for the sweet 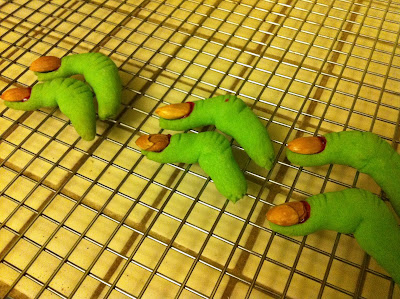 I almost couldn't find the paper this recipe was written on, leading to a moment of panic as I realized I hadn't yet posted it here, and I really, really wanted to make them.

Cream butter and sugar, then add egg, extracts, and food coloring, scraping bowl so color distributes evenly. Stir in dry ingredients until well mixed. Cover and refrigerate (not too long--the dough breaks apart during shaping if it's too cold).

Roll a small ball (heaping teaspoon) into a snake about three inches long and no more than half-inch in diameter. Bend to oblique angle as shown, pushing dough a little toward bend, so the knuckle is slightly fatter. Press almond into one end for fingernail, then use paring knife to slash wrinkles at the knuckles.

Bake on parchment paper 20-25 minutes (uninsulated v insulated baking sheets) at 325. Let cool on trays 3 minutes, then carefully lift almond, squeeze a dab of decorator gel underneath, and press back in place so the gel just squeezes out around the edges. Remove from sheets and let cool completely on racks.

My sister Laundry Queen told me last week that my blog is "lame." I think mostly because I haven't posted. So I'll try to remedy that, at least in some part.

I don't recall the genesis of this idea, but I had a 4-lb boneless leg of lamb in the freezer left over from when Mavis bought the largest leg of lamb he could find at the farmers' market for Easter dinner, and it wasn't large enough for the crowd we would be feeding. I already knew that leg of lamb worked well when roasted low and slow, plus it's summer (finally!) and I hadn't dusted off the grill yet, so I decided we needed Pulled Lamb Sandwiches. Pulled pork sandwiches are made on soft rolls with barbecue sauce and buttermilk coleslaw, but that wouldn't work as well for lamb. I wanted Mediterranean flavors, and a quick web search turned up this recipe from the Food Network, from which I stole the mint pesto and the mascarpone cheese. Nick Zukin's evangelizing has converted me to the idea of balancing the other flavors in a sandwich with something sweet and tangy, so I tried this recipe for pickled red onion, using stick cinnamon, whole cloves, whole allspice, whole juniper berries, whole mustard seed, and whole peppercorns--basically most of the whole spices in my cupboard (no coriander or cumin). Add some lettuce for crunch (should have thought of thinly sliced cucumber!), feta for zing, assemble on ciabatta panini, and I thought I had a pretty great theoretical sandwich.

The pickled red onion. I have two jars of pink stuff in my fridge now--the other is almost exactly the same color, but contains rhubarb compote I plan to incorporate into experimental rhubarb macarons with rhubarb buttercream. Stay tuned for that one. The meat, just after moving to the cool side of the grill. I browned it well, then moved it over and closed the lid for a couple of hours, until the temp on the grill started dipping. Then I moved it to a foil-covered roasting pan and finished it in the oven at 300 for a couple more hours. 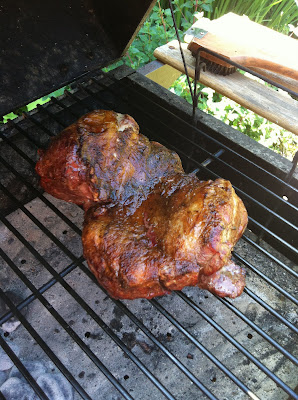 After I moved the meat inside, I used the residual heat to brown the brown-and-serve rolls. The ciabatta panini from Delphina's (visible at the right, tucked underneath the other rolls) were perfectly what I had envisioned, but there was only one package of four left at Food Front when I was shopping. The other rolls are petit pains and dinner rolls (for the kids) from Marsee. I didn't try the Marsee breads, but they all got eaten so I guess they were acceptable. :) 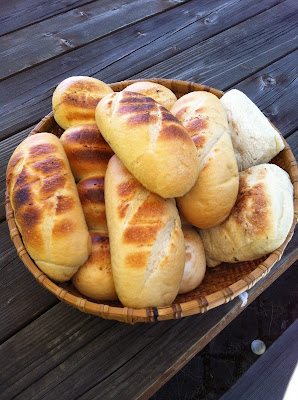 Shredding the meat. Look at that beautiful caramelization! 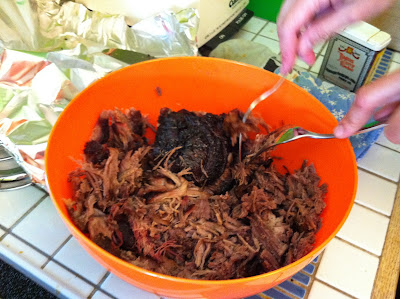 Beginning assembly: mint pesto on one side, mascarpone, feta and chèvre (I added this to the mix after crumbling the feta and finding it Very Salty) on the other. 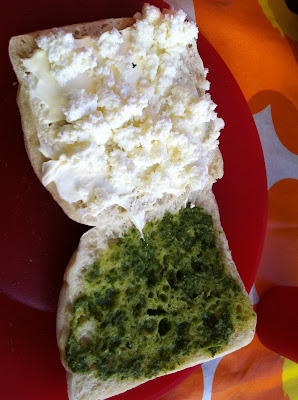 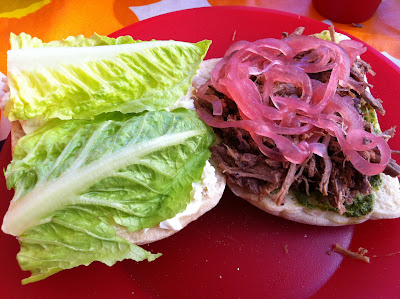 Devour. (My left index finger is really not as deformed as it looks in this picture.) 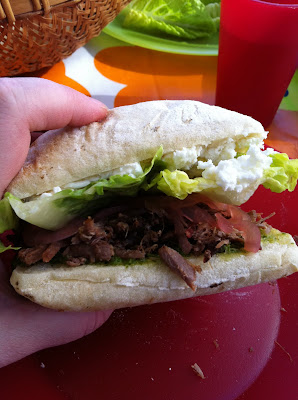 Other food on the table (obviously not exciting enough to be photographed) included an arugula (from J&J's garden!) salad with dried Oregon cranberries and Bing cherries and almonds with marionberry vinaigrette, and watermelon.
Posted by janeannechovy at 12:26 AM 5 comments:

When I lived in New York City in the early 1990s, I became quite fond of Marian Burros's New York Times column, Plain and Simple. When we got married in 1996, I was thrilled when among our wedding gifts were a couple of her cookbooks, including 20-Minute Menus, originally published in 1989. These two dinners are not in heavy rotation chez nous, but they do periodically reappear. I'm not including any pictures, because the visual appeal of these dishes is quite limited.

This recipe originally called for using a half-pound ground turkey breast; I like it better as a vehicle for leftover roast chicken.

Heat oil in large nonstick skillet. Cook meat if you're starting with raw meat, until no longer pink. Remove excess grease if any, then add onions and peppers and sauté until softened and starting to brown. Add garlic and spices and cook for 30 seconds more, until they're fragrant. Add tomatoes (and leftover meat, if using) and cook a few minute to blend flavors. Remove mixture from skillet and put beans in bottom of pan, then top with chips, meat/veggie mixture and cheese. Cover and cook a few minutes, until cheese is melted and everything is heated through. Serve with sour cream and fresh chopped cilantro, and steamed broccoli or cauliflower on the side.

In covered pot, bring lentils to boil in plenty of water to cover. Cook about 10 minutes, until soft, then drain (watch pot carefully--I don't think I've ever succeeded in not letting it boil over).

Mix spices together in a small bowl.

Heat oil in dutch oven until shimmering, then sauté onion until softened and starting to brown. Add garlic and spices and continue cooking until fragrant, about 30 seconds. Stir in tomato paste and cook another 30 seconds, then stir in chicken stock, scraping brown bits from bottom of pan. Stir in cauliflower, cover pot and bring to a boil. Reduce heat and simmer, covered, until cauliflower is tender and starting to fall apart. Stir in lentils, simmer another couple minutes to blend flavors, then remove from heat. Serve over steamed rice, topped with cashews and yogurt/sour cream.

Posted by janeannechovy at 7:23 PM No comments:

Purim fell during spring break, and though I had grand plans of making Smitten Kitchen's hamantaschen at my mother-in-law's house, it just didn't happen. I finally got around to making them a couple of days ago, and yum! I omitted the lemon zest from the dough, because I just wanted to taste the butter, and used two fillings I had on hand: Nutella topped with a few diced roasted hazelnuts, and homemade rhubarb-ginger jam. Deb from Smitten Kitchen recommends baking 15 minutes, but on insulated sheets and after refrigerating the shaped cookies, mine weren't nearly done after that long. The jam-filled ones, the paler ones in the picture below, were in for 20 minutes, and the Nutella batch probably five minutes more than that. I recommend really letting them get golden for optimal flavor and texture. For ease in handling the dough, let it warm back up almost to room temperature before rolling, but still try to minimize handling. 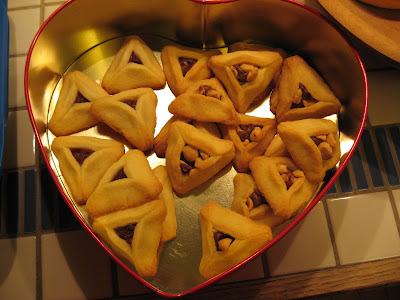 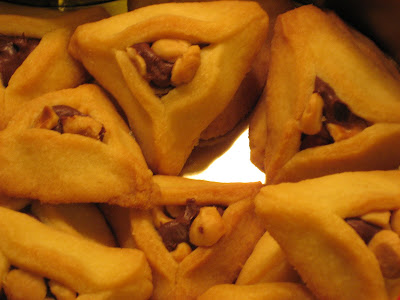 Posted by janeannechovy at 8:47 PM No comments:

I have a review of The Book of Mormon (the musical, not the book) up on a big group blog. Not a really busy comment thread, so I guess I didn't leave many questions unanswered.
Posted by janeannechovy at 5:04 PM No comments: 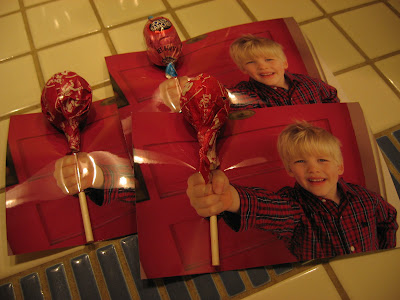 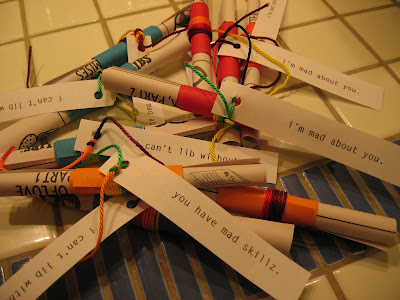 Here's the image we used for the kindergartener's Valentines, so you can see better just how cute he looks. His new method for getting a natural-looking smile in pictures includes hyperventilating and fake laughing. Seems to sort of work, though. 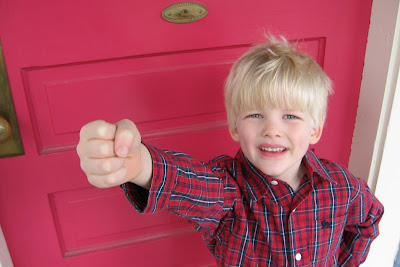 Posted by janeannechovy at 1:05 AM 3 comments: