The Potluck That Wasn't

Last night was the opening activity of Newton's school year--the back-to-school ice cream social. Last year's similar event was a potluck dinner, and with a starting time of six, it didn't occur to me that this year's wouldn't be. Silly me. So we left our salad in the car, had dessert first (blecchy little single-serving ice cream cups, you know the kind I'm talking about), and then ate what we could of the salad (I was making for a potluck, not for my little family, several members of which are dubious about salads anyway!).

I made a salad I've been craving lately: BBQ Chicken Chop. I first had it at California Pizza Kitchen several years ago, and was so delighted that I wrote down all the ingredients on the paper tape that had secured my napkin around my flatware. This time I made it with homemade ranch dressing. No, for once I wasn't trying to be an overachiever. I had come across the recipe while looking for one for dip to go with crudités. Then I discovered that the bottle of ranch dressing in my fridge was about 3 years past date and suspiciously beige. And then I realized that I had all the ingredients for the recipe. Since I'm not a frequent ranch dressing consumer, I'll probably end up making it for those occasions where nothing else will do. 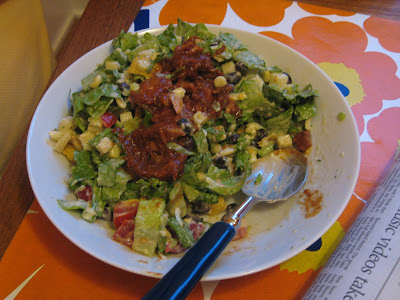 chopped lettuce (I used romaine and green leaf, about 1 1/2 heads--you need something crisp and sturdy)
5 oz grated Monterey Jack cheese
3 small scallions, minced (I used a bit more than this and came to regret it)
1 can black beans, rinsed and drained
1 C frozen petite corn kernels
1 C small-diced jicama
1 C diced tomato (I used red and orange--very pretty with the yellow corn and black beans)
ranch dressing (bottled or homemade)
broken tortilla chips
barbecued chicken, shredded in sauce (I use Lloyd's, that comes in a tub)

Toss everything but the chicken together, then top with the chicken. (If you're taking it to a potluck, take the cheese, chips, ranch and chicken separately and assemble the salad after you get there.)

To make the ranch dressing, I started with a recipe in The New Best Recipe, from the Cook's Illustrated people. I doubled it, which made a bit more than I needed for the above amount (but I think a single recipe wouldn't have been enough). I also made it in the Cuisinart instead of mincing everything by hand, and after it was put together I added more sour cream, about doubling what they originally called for. It's plenty allium-y (especially if serving with the scallion-y salad above!), so err on the side of less with the garlic, scallion and shallot. Here's how I made it:

Process in food processor in order given, scraping down sides of work bowl repeatedly to eliminate large chunks. Refrigerate and use within a few days.

I LOVE CPK chop salads. I don't do the bbq chicken one, but I make their original chopped salad all the time. Chopped lettuce, tomatoes (tons), also grated cheese (I can't get jack, so I use mozarella), little strips of salami, chopped basil (a lot), and chickpeas. With vinaigrette. YUM. Damn, now I'm craving it.

Also, bottled ranch dressing is a travesty. I'm so glad you did homemade. ;-)