Summer is rerun season, no less in my kitchen than on TV. We've been eating lots of good things, just not much new or different (I can only write about Copper River sockeye so many times, right?). Tonight's menu was something I came up with much earlier in the week, but didn't get around to making until today. Its genesis came last weekend, when we had a leftover half-baguette and half a pound of pork-sage sausage. Hmmm, I thought, maybe I should make a strata. And what better to accompany a rich, creamy, cheesy, sausagey, eggy dish than a light potato-veggie salad? So here they are. The strata is adapted from Cooks' Illustrated from several years back (useful mostly for knowing the basic proportions of stuff to fit in the pan--my combination of add-ins was not one they featured), and the salad was inspired by one I've made from the Barefoot Contessa cookbook, and also by happy hours passed recently watching The Naked Chef on BBC America. Mavis and I liked everything. The wee feller liked (snarfed!) the strata, but had to be cajoled to eat even those parts of the salad he will admit to liking (asparagus, peas, potatoes).

Slice baguette into 1/2-inch slices and leave spread on a cookie sheet overnight to fully dry out (or put in 225-degree oven for a half hour). Spread each slice thinly with butter on one side. Heat olive oil in a nonstick frying pan over medium heat, then add sausage. Brown it, breaking it up into small chunks. When it's nearly cooked, add the shallot and keep sauteeing. When shallot is translucent and starting to brown, add spinach and saute a few minutes until fully wilted.

Arrange half of bread in one layer, buttered side up, in a buttered (or Pammed) 8x8 dish. Top with half of sausage-shallot-spinach mixture, then half of cheese, and repeat. Beat eggs with half and half and salt and pepper, then pour over the top. Put plastic wrap directly on the surface, weight the top, and put it in the fridge for at least an hour and as long as over night (I managed a couple of hours today).

When you're ready to cook it, take it out of the fridge and let it sit at room temperature while the oven is preheating to 325 degrees. Then bake for 50-55 minutes, until puffed and slightly pulled away from sides. Let cool on rack for five minutes, then serve. 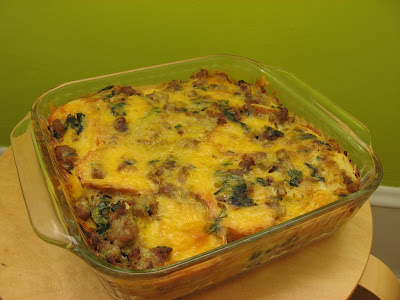 1 1/2 lbs or so baby potatoes, boiled until just tender
1/3 C corn kernels (I used the first corn of the season, three tiny ears, but I think frozen would work well, too)
other veggies, blanched and cooled (I used a few fava beans, the last few spears of on-their-last-legs asparagus, a handful of green and yellow beans, a handful of sugar snap peas from the garden--you get the general idea)*
1/3 C finely chopped herbs (I used chives, basil, dill and parsley)
juice of 1/2 lemon (a couple of tablespoons)
about twice that much EVOO
salt and freshly ground pepper

Whisk herbs, lemon juice, olive oil and salt and pepper in medium bowl, then stir in warm potatoes. Stir in other ingredients and put in fridge to cool. Serve chilled or at room temperature.

*I think the perfect amounts of blanching time are: 1 minute each for favas, asparagus and sugar snap peas; 3 minutes for green and yellow beans. For corn, drop it into the boiling water, replace lid, then turn off heat and leave it in the pot at least 3-5 minutes or until you're ready for it. With this method it won't overcook. 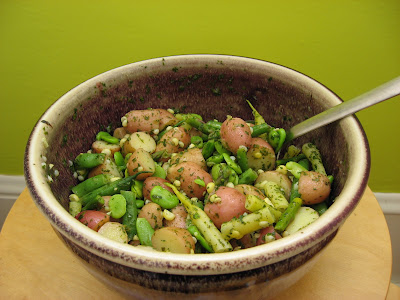 Posted by Anonymous at 6:55 PM

Logic cries out for "strata" to be plural.

(The mournful, unavailing cries of logic can be most distressing to an INTP.)

I guess it depends on what language it comes from, doesn't it? But that would require research, which I don't feel up to at the moment.

Well, I was just taking a wild yet highly-educated guess that the language is Italian, which usually gets us to Latin.

Here's something I found on the web:

"What does "strata" mean? The word "strata" comes from New Latin and is the plural form of the New Latin word "stratum". "Strata" and "Stratum" both derive from the Latin word for a "spread" or a "bed" or a "layer" of something. In culinary terms, a strata refers to a series of layers or levels of a food."

Nice recipe - I'm going to try it with veggie sausages but I doubt it will have the same texture.

HM--I don't think there's any reason you have to include sausage, ersatz or real McCoy. Like I said, sausage and spinach was not one of the combinations recommended in the original recipe. The original was for spinach, some other veggie (can't remember) and gruyere. Then there was one with sausage and mushroom, and another one I can't remember. I would just put whatever you've got leftover and lying around--that's the whole point of the dish, anyway.

MWR, I was trying to think whether strata would be singular in Italian, and to my ear it seems like it would be, with the plural being strati. But I don't really speak Italian--maybe I'll ask my sister if she's got any idea. It's also possible that they now use some other word altogether for "layer," and strata has taken on a purely culinary connotation.